Posted at 14:00h in Uncategorized by admin 0 Comments
0 Likes
Share 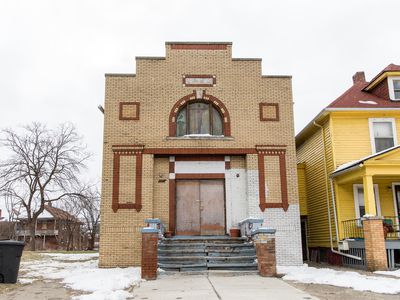 Earlier this month, we reported on the start of the Living Trades Academy, which aims at teaching historic restoration techniques to Detroiters. We recently visited the work site in the North End to the program and the community center they’re helping to restore.

The Michigan Historic Preservation Network (MHPN) is leading the program, which is currently training ten people in masonry, painting, plaster, and window repair. MHPN is hoping that these ten workers will be employed in the trades in Detroit in the next year. They’re currently set up in a house on King Street in the North End. A 1924 building next door that’s been some iteration of a church or place of worship in its life doesn’t have power or heat yet; when it does, the crew will work to restore the church into a neighborhood community center.

The crew, along with community members, MHPN, and reps from the city and the Detroit Training Center, gathered on Friday at the work site. Nancy Finegood, director of MHPN, says this isn’t the first training of its kind that MHPN has started, but it’s the most comprehensive. She noted the sheer amount of historic homes in need of restoration around the city, and there’s just not enough people to do the detailed work involved in a restoration (not just a renovation).

Phillis Judkins, the CEO of the Northend Neighborhood Patrol, says that once completed, the former church will have information and resources for the community. She says that transportation has been an issue for the neighborhood in reaching job training resources and programs.

Both the house and the church are being utilized as hands-on learning labs for the program.

MHPN says that the Living Trades Academy is truly a pilot program, and other preservation groups are closely watching it. According to MHPN, local restoration contractors and developers are committed to hiring the graduates of the program. The Living Trades Academy is funded through the McGregor Fund, the Americana Foundation, Clannad Foundation, Chemical Bank, Marvin Windows, Fallbrook Credit Finance, National Funding Inc, Farbman Group, and many preservationists.