Posted at 10:01h in Uncategorized by admin 0 Comments
0 Likes
Share 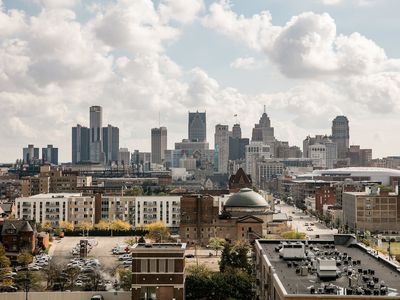 In last week’s State of the City address, Mayor Mike Duggan noted that the city needed to keep affordable housing intact in the city as more developments are announced. This week, the City announced a plan to create a fund that will extend and preserve “affordable” housing to 10,000 units that have low-income requirements, and to built 2,000 more.

The $250 million fund is made up of $50 million in grant funds, $150 million in low-interest borrowing, and $50 million in public funds from expected Federal and City funds for affordable housing over the next five years.

The plan uses Area Median Income (AMI) to determine rental assistance numbers. The AMI is determined through incomes in the Detroit-Warren-Livonia region, not the city. According to the City’s Multifamily Affordable Housing Strategy,

Affordable housing regulations divide income bands at households making up to 30%, 50%, 60%, and 80% of AMI, labeled as extremely low-income, very low- income, and low-income (including households making up to 60% AMI for LIHTC quali cation and up to 80% of AMI otherwise), respectively. These income cohorts are set for varied household sizes, and are referred to frequently throughout this document. In Detroit, the AMI for a four-person household was $68,600 as of 2017. As an example of how this translates to the AMI levels in this document, 60% of AMI is equivalent to $32,940 for a two-person household and $41,160 for a four-person household.

The fund is meant to address current housing that may face expiring low-income tax credits, as well as identify future redevelopment opportunities in vacant buildings or buildings in need of rehab that could be used for low-income housing.

“We have had a chance to observe and speak with leaders from Washington (DC), Chicago, and San Francisco and learned how they have had to make major investments in affordable housing after the real estate market grew and missed some opportunities to include affordability in the their revitalization,” said Arthur Jemison, Director of Housing & Revitalization in Detroit. “With a strategy and fund of this kind, we hope to learn from their efforts and invest in affordable housing now.”

The plan is expected to be implemented over the next five years. More details can be found in the strategy here.