14 Mar Peek inside the Selden in Midtown

Posted at 14:30h in Uncategorized by admin 0 Comments
0 Likes
Share 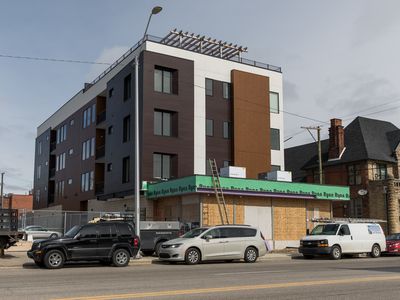 If you’ve stopped by Honest John’s lately, or driven down Cass Avenue in Midtown, you probably noticed a new addition on Selden Street. The Selden, led by the Ferlito Group, brings 12 new condos plus restaurant space and a rooftop deck to the neighborhood. We stopped by for a preview.

Two of the units remain for sale, while some residents have started moving into the others. The restaurant/retail space is still being built out; the restaurant SheWolf plans on setting up shop this year. The rooftop deck offers views of Midtown, downtown, and the Ambassador Bridge; residents will also have access to a dog run.

The two condos still available include a two bedroom, two bath third floor unit for $504,000, and a two bedroom, two bath second floor unit for $475,000. Units are listed through the Loft Warehouse. The condos have been selling for $393-448 per square foot. Residents will also have an indoor garage space; we’ve heard diagonal parking could be added to Selden Street for additional street parking. There’s a lot adjacent to the structure and across the street, but they’re owned by Detroit Public Schools.

It’s a very different look for the street and for the neighborhood. Let us know what you think.