Posted at 16:22h in Uncategorized by admin 0 Comments
0 Likes
Share 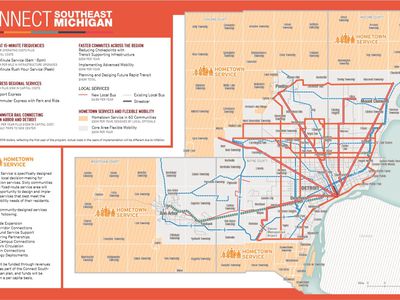 In recent months, many thought Wayne and Washtenaw Counties would move forward on their own with a partial regional transit plan. Not so fast! Wayne County Executive Warren Evans has a new plan that includes all four counties (Wayne, Washtenaw, Oakland, and Macomb) in hopes that the RTA will adopt it and residents will vote for it this November.

The plan is called Connect Southeast Michigan. Think less bus rapid transit and rail (like in the last plan) and more buses more frequently. Here are the details:

Transit was seen as a big factor in Amazon’s decision to leave Detroit out of its top selections for HQ2. Evans has pointed out this week that the region spends far less on transit than other large cities. The proposed plan would bring Metro Detroit spending up to $110 per capita.

While Detroit sank from the 5th to the 18th largest city, others invested heavily in transit, using it as a tool to attract business & talent. At today's RTA meeting, I will present a plan to change that & provide real opportunities for residents throughout SE Michigan. #RTA2018 pic.twitter.com/UKQicsoBqE

The full plan can be read here.