Posted at 12:50h in Uncategorized by admin 0 Comments
0 Likes
Share 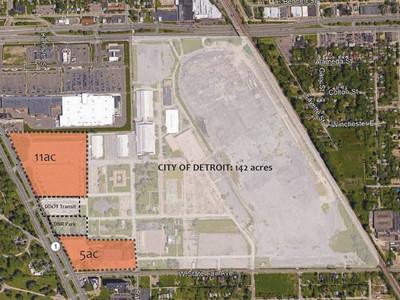 Last month, we asked if the State Fairgrounds redevelopment would gain momentum this year. Yes, yes it will.

According to the Detroit Free Press, the Michigan Land Bank Fast Track Authority Board of Directors agreed to a proposal from the City of Detroit to purchase 142 acres of the site for $7 million. Developer Magic Plus, LLC—who’s had the land for years—will get 16 acres primarily along Woodward Avenue near the Transit Center and at State Fair Avenue.

City Council will need to approve the purchase.

A community group called the State Fairgrounds Development Coalition has advocated for a community-led green development at the massive site for years. The land sits at the northern border of the city, with areas along both Woodward Avenue and 8 Mile. The group called for a transit-oriented development with green infrastructure, while Magic Plus LLC had proposed a basic, large mixed-use (and still car dependent) development.

The city is expected to issue RFPs for redevelopment of the property later this year.