Posted at 14:49h in Uncategorized by admin 0 Comments
0 Likes
Share 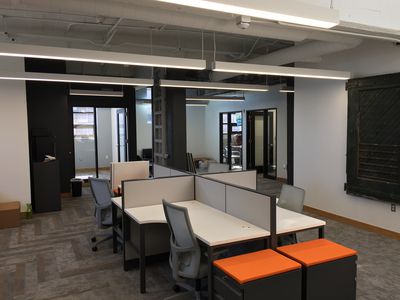 The neighborhood of Brush Park has undergone a rapid amount of change in the past few years. With the resurgence of downtown and the addition of Little Caesars Arena, the neighborhood has seen many new residential developments and restaurants recently. Real estate firm BBG, a commercial and multi-family valuation firm with headquarters in Dallas, saw how moving their offices from Livonia to Brush Park could benefit its employees.

BBG Senior Managing Director Marc Nassif tells Curbed that the company’s employees were downtown two to three times per week doing appraisals on various properties, and it made sense to move closer to downtown. They bought the building at 42 Watson—which formerly housed an auto garage and most recently, offices for the Heidelberg Project—and started an extensive renovation. They replaced many of the systems in the building and in the renovation, saved parts of the 100-year-old building like old doors and a freight elevator.

“Our redevelopment of this building uniquely positions us to understand the challenges and opportunities in Detroit,” says Nassif.

The building itself is still in construction mode, but BBG staff has moved in. The rest of the spaces should be ready in the next 45 days.

The building will also be home to a few new tenants, including Second Best Bar, which plans on opening later this spring.