Posted at 09:02h in Uncategorized by admin 0 Comments
0 Likes
Share 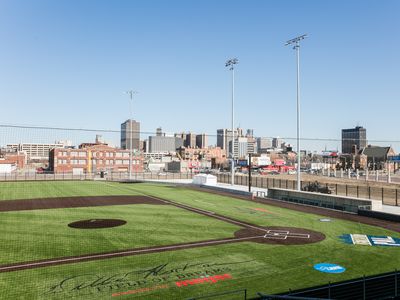 Now home to the Willie Horton Field of Dreams

The corner of Michigan and Trumbull has a long, storied baseball history. It was first known as Bennett Park, then Navin Field in 1912. As capacity grew, the name changed to Briggs Stadium (where the Lions also played) in the 1930s, and then, of course, it became Tiger Stadium. The Tigers moved to Comerica Park in 2000 and the future of the stadium was unclear for years; demo started in 2008. For years, a volunteer group called the Navin Field Grounds Crew maintained the field, where eventually vintage baseball games were played again and visitors could stop by and bask in nostalgia.

Redevelopment plans came and went, and finally, in 2016, ground broke on the first development at the site—a new headquarters and ball field for the Detroit Police Athletic League, who serves 14,000 youth a year. A ribbon-cutting ceremony is scheduled for Saturday, March 23, and photographers Michelle & Chris Gerard stopped by to see the new playing field at the old ballpark.

The stadium and headquarters are the result of a $20 million fundraising campaign by Detroit PAL. The new development includes the 8,500-square-foot headquarters and banquet hall, plus the new baseball field, which maintained dimensions of the old field. After a highly debated decision, the field was made of artificial turf instead of grass.

The ribbon-cutting ceremony on Saturday will be followed by high school baseball games. PAL intends on using the field for a variety of purposes in the future, including football, soccer, concerts, and movie nights. The banquet hall is also available to rent out for event space.

Some elements of the old ballpark have made it to the new field, including the green chairs behind home plate and the old flagpole, which has been repainted and sits at the far end of center field. Sponsorship is key to this whole development (including naming sponsors Adient and Meijer), and a Kar’s Nuts flag—along with the American flag—will fly from the old flagpole.

The Corner Ballpark officially opens to the public March 24 at 9 a.m. Here’s a look inside.