Posted at 12:53h in Uncategorized by admin 0 Comments
0 Likes
Share 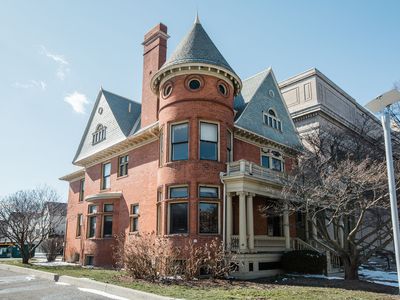 One of Detroit’s historic old homes could have a new address soon. The David Mackenzie House—home of Preservation Detroit and the Urban Consulate—is in the way of plans for a Hilberry Theatre expansion at Wayne State University. The plan has been in the works for a long time, but the Board of Governors votes on the contracts and funding today.

Preservation Detroit posted about the situation last night on Facebook.

Preservation Detroit was formed in 1975 in an effort to save the historic Mackenzie House; they’ve had their offices in the 1895 Queen Anne home for decades. If the vote goes through, construction would start and the house would be moved in the fall.

Where could it move? According to the plan, it would move from its current location on Cass Avenue around the block to the corner of 2nd Avenue and Forest.

In this theater expansion plan, both the Bonstelle Theatre on Woodward and a shop building at 95 West Hancock would be decommissioned.

The plan calls for a renovation of the current Hilberry Theatre and construction of a 71,300-square-foot addition.

We’ll update with more information as it becomes available.