26 Mar Comerica Park: The ultimate guide to the home of the Detroit Tigers

Posted at 15:24h in Uncategorized by admin 0 Comments
0 Likes
Share 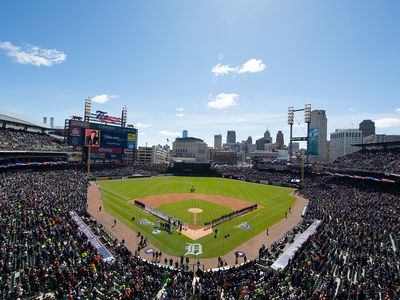 Some of the best views of Detroit’s skyline can be seen from the home of the Detroit Tigers—Comerica Park. Located right in downtown Detroit, the ballpark opened in 2000 to replace the aging Tiger Stadium in Corktown. Known for its tiger statues, ferris wheel, and homage to the Tigers’ long history, the stadium attracts over 2 million baseball fans every year. As the Tigers head into their 2018 season, here’s a look at how to get there, what to eat, how to beat the heat (or snow), who to watch, and where to get the best photo ops in the ballpark.

For those flying into Detroit Metro, there are a variety of ways to get to the ballpark and downtown. Many will rent a car or take a taxi or ride-hailing service. By car, it should take about a half hour on I-94—depending on traffic. A new bus service called FAST picks up passengers at both airport terminals and runs along Michigan Avenue, right downtown—there’s even a stop in Grand Circus Park if you’re traveling from the airport to the game.

Coming from the northern or eastern suburbs? The FAST bus runs along Woodward and Gratiot, with stops at Grand Circus Park. West of downtown (Corktown, Dearborn), the FAST Michigan route (see above) will get you there.

A number of shuttles in various bars and restaurants around town take patrons to and from the game for just a few dollars or a tip for the bus driver. Check out our map here. It’s an easy way to park outside of the Central Business District, save some money, and have fun.

If you’re coming from Midtown or New Center on the Qline, get off at the Montcalm or Grand Circus stop. Taking the People Mover from another part of downtown? Exit at Grand Circus Park or Broadway.

If you absolutely must park near the stadium, surface lots or structures will charge $10-30. Bring cash just in case. Street parking is an option downtown as well. Check signs and download the Park Detroit app (which will keep track of your time). Parking on the street is free on Sundays.

Biking from a different part of the city? MoGo Bike Share stations are located at Grand Circus Park and Brush & Madison Streets.

If you’re riding your own bike, rack options are limited nearby, but there is one east of Woodward at West Columbia and a small rack inside one of the parking decks.

Comerica Park is walkable from nearly anywhere downtown, and from Brush Park and the Little Caesars Arena district.

Comerica Park is not a foodie destination. Every year, baseball stadiums try to outdo each other with ballpark food; last year, Comerica Park unveiled the coney pizza to the world (we’ll pass, thanks). This year, it’ll offer even more variations of deep-fried bread, including a Nutella egg roll and doughnut ice cream sandwich. For places to check out in and around the park, our friends at Eater post an update every year on the best places to eat before and during the game.

As far as concessions go, expect to find plenty of hot dogs, pretzels, and pizza (Little Caesars, since this is an Ilitch-owned team). Looking for something different? Try the shawarma nachos or the street tacos (located behind section 129).

Gluten-free options are limited, and according to the Tigers information page, include hummus and veggies, frozen lemonade, and hot dogs or sausages without a bun. The Grab and Go section also has some salads and snacks. Find a few more options here.

Comerica Park is fairly lenient as far as sports stadiums go in terms of what you can bring inside. It gets hot in the park during the summer, and fans should be prepared for any weather in the spring or fall. Here’s a summary of what you can—and can’t—bring into the park.

Bags without hard exteriors are allowed, but must be under 16 by 16 inches. Any bag—no matter the size—will be inspected at the gate. Soft-sided bags allowed inside include purses, diaper bags, and coolers.

Remember, Comerica Park does not have a roof, so fans are exposed to the elements, whether that means sun, rain, or snow. It’s easy to get sunburned or feel like you’re broiling in the seats at the ballpark. If someone needs a break or some shade, the area behind section 147 has a breeze, shade, and nice views from the outfield. Dippin’ Dots and drink options are also nearby.

After being inside all winter, some of us can be prone to burns, even on cloudy days. Visitors can of course bring sunscreen, but if they forget, it’s available at the Grab and Go station outside section 148.

If it looks like rain, fans can bring umbrellas; just be aware of people in the surrounding seats. Rain ponchos are also a popular option for rainy games.

The weather can be tricky in April and September. The Tigers have played in some snowy games at Comerica Park. Bundle up with hats, scarves, and many layers to keep warm in the stands—especially if you’re at a night game.

What snacks can fans bring inside? Unopened bottles of water; juice boxes for kids; and small, individual portions of food.

Trying to stay out of the sun?

For games starting at 1 p.m., you’ll feel the sun unless you’re in one of the higher rows of the 100 section near the concourse. Once the sun heads west, the mezzanine—or 200 section—becomes shadier.

Want to see the pitchers warm up?

The lower rows from sections 144-151 are located right above the bullpens. Bonus: Sections 147-151 are in home run territory.

Looking for the best skyline views?

Anywhere along the third baseline, either in the lower or upper deck, will give you some awesome views.

Hoping for a good look at the game without breaking the bank?

Sections 324-331 are located right above home plate—above the press box—and high enough to get a good overall view of the field.

Do you need some leg room?

A tipster tells us the first row of the upper box infield seats are not the best for people with knee issues or longer legs.

Looking for more tips on where to sit? Find more ideas over at Bless You Boys.

One of the most recognizable landmarks visible from the ballpark is the whale mural on the side of Broderick Tower. “Whale Tower” was created by artist Robert Wyland in 1997. Wyland has painted many whale murals all over the world; this one is meant to bring attention to the need to save humpback whales.

Kids will love the big tiger out front, and they’ll have a blast with many of the fun attractions inside. The ferris wheel of baseballs is a must-see, along with the carousel of tigers. Behind section 106, kids can see how fast they can pitch or try to hit a few balls. On Sundays, children can run the bases after the game and get their faces painted like a tiger.

Historic Moments at the Park

Celebrating the 50th Anniversary of the Tigers 1968 World Series Championship

Remember the days of Al Kaline and Willie Horton? This year, the Tigers celebrate the 50th anniversary of their victory in the 1968 World Series. Throughout the season, special ceremonies are planned. Promotions include bobbleheads, a 1968 jersey, and a celebratory weekend in September. The full schedule can be found here.

Outside of the ballpark, both the Detroit Institute of Arts and the Detroit Historical Museum have special exhibits marking the occasion. The DIA’s Play Ball exhibit opens on opening day, March 29, and runs through September 16. Visitors can browse through an extensive collection of memorabilia and baseball cards.

At the Detroit Historical Museum, “The Year of the Tiger” opens April 21, with stories about and insight into how the Tigers won it all during this turbulent time in the city.

Love dogs? Love baseball? Want to bring your dog to a baseball game? Bark at the Park comes back to Comerica Park May 14 and September 17. Those who want to bring their puppers need to purchase special tickets, and a section will be designated for these fans. Proceeds benefit the Michigan Humane Society.

The Detroit Tigers—and Tigers fans—are entering an unusual season. Since 2006, expectations have been high for the team, and so has payroll. But in the past year, as management realized the team wasn’t heading to the playoffs, they started trading players with big paychecks. This includes fan favorites J.D. Martinez, Ian Kinsler, and of course, Justin Verlander, who was traded at the deadline last year and went on to win a World Series with the Houston Astros.

The Tigers will have a young team this year, along with a few veterans. And of course, many of the same faces and voices in the Tigers world will be along for the ride. Here are a few people to know.