Posted at 11:41h in Uncategorized by admin 0 Comments
0 Likes
Share 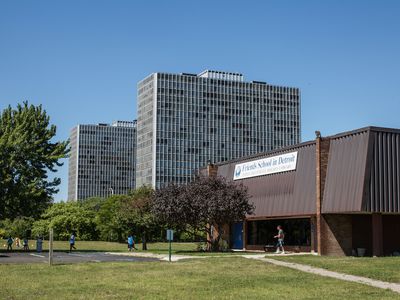 Development season is starting to pick up in the Motor City. Here are a few stories we’ll keep our eyes on. Have you seen any development news bites we should know? Drop us a note on the tip line.

Preliminary work looks to be starting soon on one of the major developments downtown. Crain’sreports that demolition of two buildings that sit on the development site of the Monroe Blocks will commence in June.

This demo would make way for the underground parking for the development. The $830 million Dan Gilbert/Bedrock development will bring a residential tower, a few mid-rise apartment buildings, and a 35-story office tower downtown. It’s one of many huge developments in the works for Dan Gilbert, including the Hudson’s development, the Book Tower renovation, the Shinola Hotel, the David Stott Building, City Modern, and the fail jail site.

A big development could be heading just outside of Lafayette Park. The Friends School, which closed in 2015, was purchased earlier this month by groups of well-known developers, reports the Detroit Free Press. Broder & Sachse Real Estate, Woodborn Partners, and Hunter Pasteur Homes are planning a large development on the site, which sits across from the Dequindre Cut at East Lafayette Street and St. Aubin Street. Reports say that the development would include over 200 residences, with apartment buildings and townhouses, although the developers claim that this is not accurate. We’ll update with clearer plans when they’re available.

A building we featured just over a year ago—the Grosfield Building on Michigan Avenue—looks like it’s heading for redevelopment. The crumbling building stands with a handsome turret west of Corktown, and last March some tipsters noticed that the back of it was falling apart.

Crain’s reports that a group going by Warehouse Development will redevelop this and other nearby buildings in a $4 million mixed-use development. Included in the development will be 20 for-sale lofts in the $175-250,000 range, plus restaurant and retail space along Michigan Avenue. This could be a catalyst for more development in that area (especially if Ford moves into MCS), and we’ll share the listings as they come online.