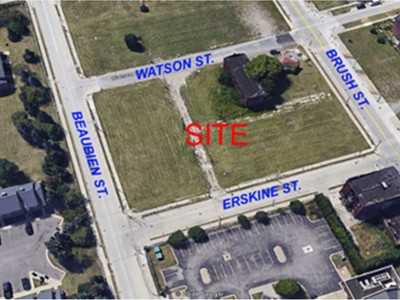 Not too long ago, Brush Park was a neighborhood with decaying Victorian homes and large plots of vacant land. Redevelopment and renovation efforts have changed the neighborhood into a high-demand location in recent years. We’ve seen many individual homes undergo renovations (including the highly publicized Ransom-Gillis House), the addition of multiple high-end condo developments, and of course, Bedrock’s enormous City Modern development. The neighborhood truly looks different week by week.

A new RFP recently released offers nearly an acre of land (almost a full block) up for redevelopment for $1.2 million. The land is bordered by Brush, Watson, Erskine, and Beaubien Streets. The RFP is through Summit Commercial, with the Detroit Building Authority, the City of Detroit’s Housing and Revitalization Department, and the Planning and Development Department.

The RFP specifies that it’s looking for a mixed-use development with at least 80 residential units, with 20 percent affordable to households making 80 percent of area median income or lower. The development can be a mix of for-sale and rental units, but should be at least 50 percent rentals.

Bids are due May 14th. A similar RFP was released last year for 100 residential units on a nearby parcel of land. With these and more developments in the works, Brush Park could be one of the most transformed neighborhoods in the city.