Posted at 14:15h in Uncategorized by admin 0 Comments
0 Likes
Share 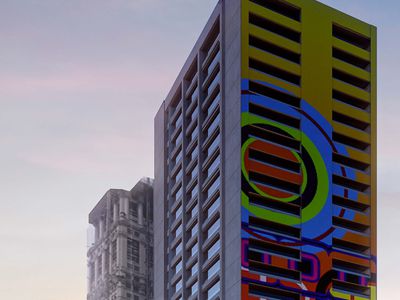 A Brutalist building in downtown Detroit is about to get a colorful makeover. First reported in the Detroit Free Press, a new mural by acclaimed artist Beverly Fishman will soon go up on the side of Detroit City Club Apartments.

The new mural called “Rise” will be 170-feet-tall on the north side of the building, which will face the under-construction City Club Apartments at the old Statler Hotel site. Detroit City Club Apartments is also next to the Book Tower, also currently undergoing a significant renovation.

The Free Pressstates that the mural will be painted by Motown Sign and—depending on the weather—work should start in the next ten days.

Fishman, Artist-in-Residence and Head of the Painting Department at Cranbrook Academy of Art, says,

“The mural’s design is inspired by my interest in Detroit as a center of cultural and industrial innovation. Machined forms collide with colors that evoke both natural and electronic lighting. The mural’s rhythmic repetitions, designed to achieve a counterpoint with the building’s horizontal balconies, are inspired by the techno pulse of the city’s electronic music scene–as well as the echo of its assembly lines.”

Once started, the new mural will take about four weeks to complete with 100-150 gallons of paint.