Posted at 13:22h in Uncategorized by admin 0 Comments
0 Likes
Share

Home prices around the country are continuing to surge—and they are not likely to slow down any time soon. In the last three years, the national median home price has increased about 20 percent, with annual gains of six percent on average. Meanwhile, in some areas, home prices are hitting warp speeds. Seattle and Denver metro areas have experienced about 40 percent price gains in the last three years.

Lack of housing inventory is considered the main reason that drives up home prices. Although new home construction has picked up, it is still not enough to accommodate the increased housing demand. Recently, the pace of permit issuance has been only about half the peak level in 2005. Furthermore, the unemployment rate has dropped below 4 percent due to a strong economy. As more people enter back into the work place the demand for housing is expected to increase as Americans set their sights on homeownership.

NAR identifies the metro areas with the highest deficit of homes. The Monthly Housing Shortage Tracker is an index, which compares how many permits are issued relative to the number of new jobs. The higher the index the higher the housing shortage in the area since it shows that more jobs have been created than homes. Based on the historical average, two permits are issued for every new job. However, the highest value for the index in April was 13.6 in the San Jose, CA metro area. This means that for every 14 new jobs a single-family unit is permitted. In contrast, a single-family unit is permitted for every new job in Sarasota, FL metro area.

The “usual suspects” are at the top of the list. It is noteworthy that, among the top ten metro areas with the highest housing shortage, seven are located in California. 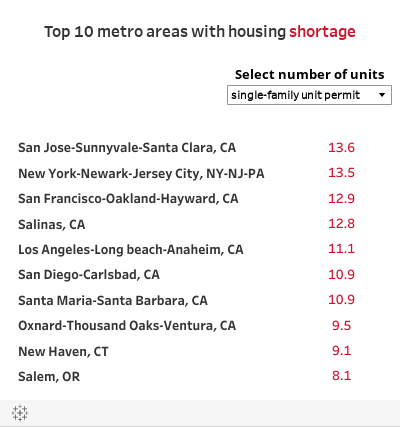 The visualization below allows you to see how many permits are issued for every new job for 178 metro areas. Click on a metro area on the map and see the number of permits issued and new jobs created in the last three years.

So, what should be done? Here is a very simple answer: build more homes. There is strong demand for housing, but not enough supply. That leads to rising home prices. By increasing the supply of housing price growth will ease. However, building too few homes may be the most significant factor, but not the only one. The vast majority of houses coming on to the market are not newly-built, but existing homes. In the meantime, the number of residents age 65 and over grew from 35.0 million in 2000, to 49.2 million in 2016, accounting for 12.4 percent and 15.2 percent of total population, respectively. The median age is increasing in most areas of the country. This means that the average homeowner has become less likely to move and therefore fewer existing homes will be put on the market. So, while building more homes will help housing shortage, other factors, including an aging population, will make a return to “normal” housing inventory levels difficult to reach in the near-term.